He wanted to ride the carousel at the mall. He’s five now, so I got on with him intending only to help him find an animal and climb up. The carousel was old and small, and wobbled as everyone climbed aboard. I put him on top of a brown horse with a flowing mane and wild eyes — It was a good fit.

He grabbed onto the pole with both hands, leaned into it, trembled a bit and looked at me with worried eyes as he surveyed how high he was and felt the wobbling of the ride before it had even begun. He looked up and noticed that the pole was at its low point and asked me if it would go even higher.

He is awake now, this little boy. Aware. He struggles with the lankiness of his legs, tries to understand his changing body as he faces growth spurt after growth spurt in an unrelenting parade. He is no longer an over confident toddler who charges into battle, he sees the world around him and senses danger, feels overwhelmed by noises, is trying to find his place.

I decide to stay on the ride and stand next to him. I put both my hands firmly about his waist, lean in to him and whisper, “It’s okay, I’ve got you and I won’t let you fall.” His eyes meet mine and I feel his body relax, feel his tension fade. “Look at how pretty the carousel is” I tell him, and he does. He loosens more, looks around and points out the paintings, the mirrors, the old round light bulbs. 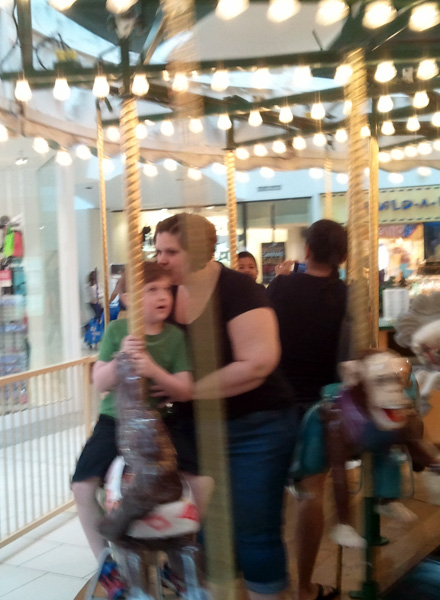 Feeling him trust me so completely moves me. I feel it deeply in my chest and I lean in and kiss the back of his head so he won’t notice that I’m tearing up. Good tears, “happy tears” we call them, but I don’t want him to have to ask me about them. I want him to stay in this moment. The ride starts and he grabs a little tighter to the pole, but is still relaxed, my hands still around his waist. He knows I won’t let him fall.

That’s my mantra as his mother. It’s the banner I wave as I march into this battle every day. I have him, I’m here, and I won’t let him fall. Look around, enjoy the world and don’t be afraid, I have you.

I am someone who knows what it’s like to fall, to wobble and look around for a guiding hand. I am made of worry and fear. I am often overwhelmed, scared, and then shut down.

I remember when I first discovered I was pregnant. At first, I was elated… but not long after, I curled up on the edge of the bed and sobbed as I remembered the loneliness and fear of my childhood. I knew that I had the potential to damage another human being forever.  I was already afraid I would fail this tiny person who was still in the process of being made.

In crowded places, I look down and follow my husband’s feet, I stay focused on just getting through – I often miss the beauty of the place, the time, the moment. But, at least I have those feet to follow.  I was fortunate to find someone who would hold me and make me feel safe, but I missed so much before I found him.

But this isn’t how it will be for my son, not him; he will know that there are hands gently but firmly around his waist. He can climb onto the highest, craziest looking horse on the carousel and I will stand next to him, I will lean in as the ride starts, and I will let him look around and enjoy the moment – I have him and I will never let him fall.