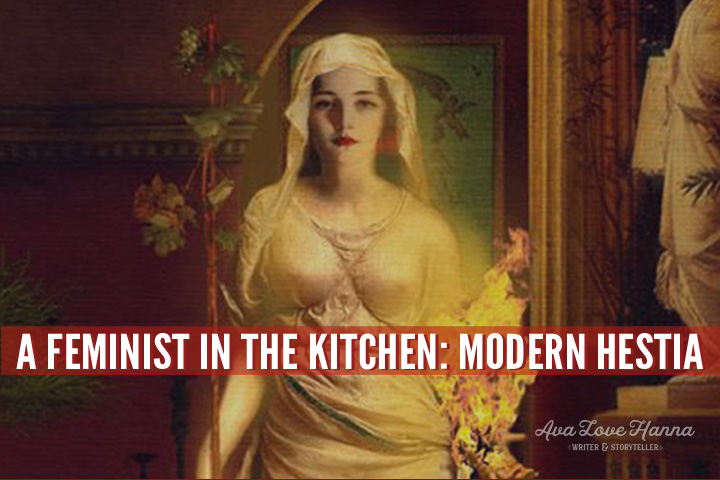 I’ve been thinking about Hestia lately, the virgin goddess of home and hearth. Basically, her story goes like this: she was pursued by both Apollo (the god of the sun) and Poseidon (the god of the sea), but rejected both of them and chose to remain a perpetual virgin in order to keep the peace.

As a reward, Zeus gives her the duty of maintaining the fires of the Olympian hearth.  Oh, and the hearth isn’t portable, so she was rewarded with a life in the kitchen… forever.

On the one hand, Hestia is a model for feminism, choosing not to marry and instead rejecting both of her suitors. On the other hand, she is now trapped in the freaking kitchen forever, an incredibly subordinate role. Is that what she really wanted?

Hey Hestia, good job there on keeping the peace and giving up all future sexy funtimes. Here’s your reward, you see that kitchen over there? That’s all you. Oh, and that fire’s not gonna tend itself. Yeah, you’re gonna be pretty busy and stuff so you won’t really get to hang out with the rest of us either, but uh, thanks again.

I won’t lie. That seems like a pretty raw deal. And although I already know the answer to this (hint: it has to do with wieners) why did she have to be a perpetual virgin? It’s not like fidelity was a big deal in Olympus. Gods know Zeus had sex with anything that moved. This sounds a bit like the whole double standard of the woman you want to have sex with versus the good girl you want to marry (or trap in your kitchen forever).

Hestia is also considered to be the most gentle, charitable, and kind of all the Greek gods… but really how hard is that. I’m sorry if I offend any of my currently practicing Hellenist friends here, but I’m gonna say it, Zeus is kind of a dick. It doesn’t take much to seem nicer than him. Yet, a point is made to say that Hestia is gentle and kind. It’s a nice image: sweet, gentle, Hestia, who will hang out in your kitchen stoking your fire all day (and that’s not an innuendo because she doesn’t put out).

Does the contradiction of Hestia versus the more empowered goddesses reveal an understanding of the complexity of women’s roles? Or, does it just set up an impossible standard for women to meet? We all know those guys who want a Hestia on the streets and an Aphrodite between the sheets, but aren’t those two ideals mutually exclusive?

I know I struggled with this idea, but not for too long, because I lost my eligible-to-be-rewarded-with-a-life-in-the-hearth card a looooong time ago. Virginity, perpetual or otherwise, wasn’t on my agenda. And as a young woman, I hadn’t considered the prospect of staying home and tending the hearth.  I just assumed I would be out wreaking havoc in the working world in some way. The idea that getting married and having a child would mean I would want to be home was inconceivable to me.

Now, as a modern woman who is highly educated, has career options, and yet is choosing to stay home while my son is young, there is a feeling of empowerment in the reclamation of the hearth as my domain and in seeing it as a reward rather than a punishment. I am choosing to cast aside the modern gods of wealth and martini lunches to keep the peace with my boys. I am here feeding the hearth fires by choice, though I am definitely not a virgin (insert whistle here).

So, here I am, feeling like one big contradiction, part Hestia and part Aphrodite, but keenly aware that I have the luxury of making that choice. And maybe, that’s the real task of modern womanhood — to embrace all of the contradictory aspects we’ve been taught about the divine feminine and to simply accept the pantheon within us.

I’ll leave you with my spoken word track of Hestia — a brief exploration into my role as a not so virginal hearth keeper: