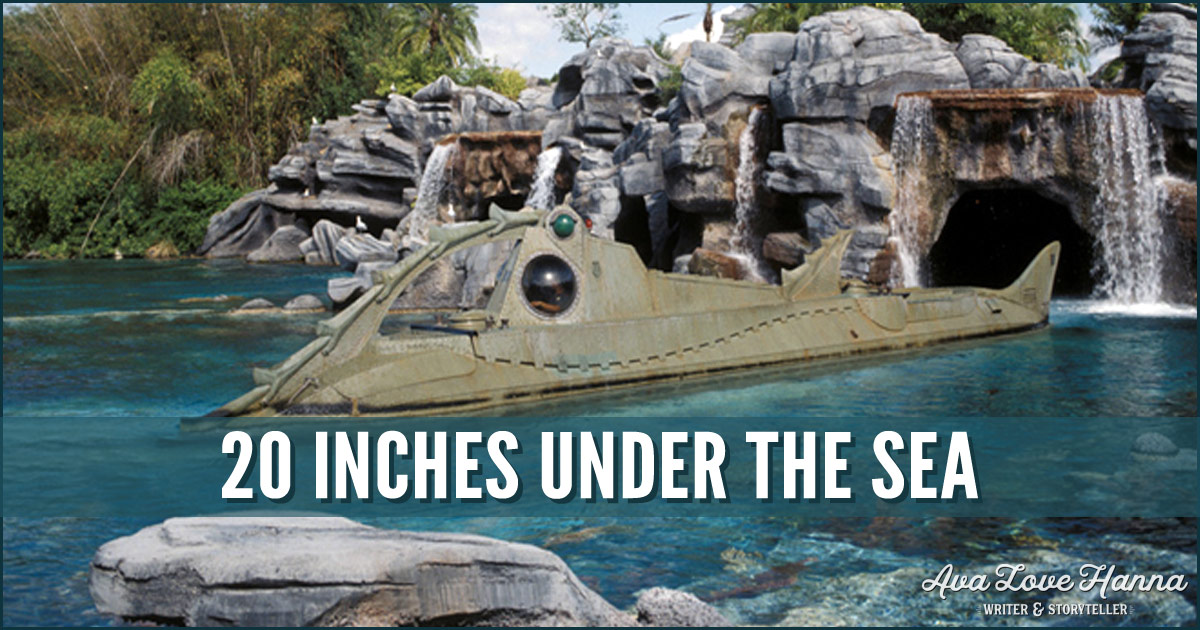 When I was a kid, my favorite ride at Disney World was always 20,000 Leagues Under the Sea. I loved it. There was something wonderful about voyaging under the sea. Maybe it was the water, the colors, the fantastical ruins of Atlantis, or how my heart would race as the giant squid wrapped its tentacles around the Nautilus and all seemed lost before we wrestled free and triumphantly made our way back to the serene beauty of the tropical lagoon.

As a parent, I wanted to share this adventure with my young son. As we prepared for our trip to Disneyland for his 5th birthday I was thrilled to discover that while 20,000 Leagues Under the Sea ride was gone, they had kept the subs for the Finding Nemo Submarine Voyage. Awesome. We watched videos of the ride on youtube and I waxed poetic about my childhood memories of a similar ride and told my son just how much fun it would be.

Once we were in the park, I couldn’t wait to get to that submarine ride. I skipped through the line and gleefully climbed aboard what seemed to be a much smaller version of the submarine of my youth. Hmm. It was then, about 5 seconds later, that my excitement quickly faded. As I climbed into the now tiny submarine and sat on the little stool by the minuscule window and the employee on the outside shut the door and locked us in the miniature submarine… that I suddenly realized that I no longer wanted to ride inside this teeny tiny little metal box that had no discernible opening from the inside.

I have always believed that life is all about learning and growing, seizing opportunities to learn more about ourselves, our likes and dislikes, who we really are. Well, this was one of those times. This was the moment that I realized quite clearly, that I am fucking claustrophobic.

Not wanting to immediately ruin this experience for my son, I took a deep breath and tried to relax. I did all the normal stuff to calm myself: I told myself that Disney employees do this all day long, I reminded myself that there were no skeletons on the sub, so obviously people got off eventually, I noted that we weren’t actually 20,000 leagues under a sea, I listened to the happy voices of the children, I looked at the smile on my son’s face… Yeah, none of that crap worked.

I don’t know if you’ve ever had a panic attack, much less one that you are trying really really hard not to have, but for me, I had a feeling of creeping coldness that started at my feet and was spreading upward. I was certain that if that cold feeling made it all the way up to my head, I was going to do or say something super embarrassing. I tried to take my mind off of it and I started thinking about all the jobs and adventures that I was no longer interested in attempting: Deep sea diving? Right out. Exploring the Mariana Trench? Hell no. Marine biologist? Nope.

I tried looking up where the “captain” was standing thinking that the employee surely had an escape hatch. That made it worse. He was in a sealed dome. I swallowed a scream.

I attempted to be poetic and thought how I was the personification of the nautilus and the actual nautilus that I was riding in was now my giant squid. I was gasping for breath trying to stay calm.

I started to wonder what would happen if just freaked the hell out. What If I started screaming and demanding to be let off? Did they have sub marshalls to tackle me?  Surely, I could not be the only person to get claustrophobic in that itty bitty sub. Did they have some sort of crazy person freaking out back up plan? I was dangerously close to finding out.

I then started to wonder what would happen if I tried to pry open the lid and jumped out to swim to shore. I only stopped myself because I knew that the temporary thrill of being free would surely be replaced by the shame of being banned from Disneyland for life. I wasn’t sure I could afford the inevitable therapy bills for my son after that. Also, I really didn’t want my claim to fame to be “that crazy lady that scarred all those children” at Disneyland.

Soon we entered into the cave and things got more awesome. Because what could be better than being trapped in a tiny submarine and pretending to not have a panic attack so that you aren’t freaking out all the small children crammed next to you? Doing that in 30 seconds of absolute darkness. I was so stressed out that I wasn’t following the story. At one point, I heard my sweet little 4 year old son’s voice drift through the pitch black to ask me, “Mommy, are we in a shark?” To which I’m almost certain I said, “Yes,” which was an awful thing to say. Yes, my dear little child, we’ve been eaten by a shark, but isn’t this just sooooo fun?

Eventually we got out of the shark’s stomach or whatever was actually happening in the story and made our way back out to the sunny lagoon. I was done, really done, ready to get back to my life on land and leave my underwater adventures behind. And we were there, the home stretch, I was a few glorious minutes from getting out. I had made it. And then…

OF COURSE our submarine comes to a stop in a spot that I can tell is near, but not near enough to the spot we will exit. I am trembling from anxiety, but I know that if I can just hold on for one more minute, I’ll be okay… and that’s when Captain Nemo up in his little bubble dome announced that due to a boarding issue with the boat ahead of us, our ship which I have now dubbed the USS GET ME THE HELL OUT OF HERE, would be delayed from deboarding… but hey, we should just sit back and relax. Well, of course, I was on the inner row of the submarine staring right into a cement wall.

There I was, the most claustrophobic person in the sub, stuck staring into a wall. I was tempted to laugh at the situation, but my anxiety level was so high at that point, that I was certain it would come out as some sort of crazy hysterical cackle. For the next 15 agonizing minutes, I took deep breaths and continued to remind myself that I probably wouldn’t die there. Probably.

And while this ride was not the magical experience I hoped it would be, it was a valuable learning experience. I learned 3 important things:

So, while I still have fond memories of my youthful voyages aboard the Nautilus, I have decided that, for now, my undersea adventure days are over and it’s probably best if leave the wonders of the Disney lagoon to braver souls than I.

I told this story as part of the A Night of Squid benefit show produced by Max Langert. Proceeds from the show went to benefit the Autism Society of Central Texas.