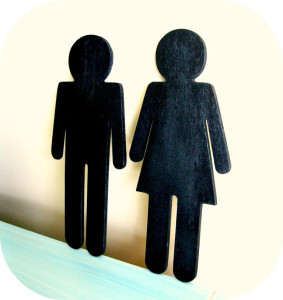 ** Update: The video of me reading this essay in the Listen to Your Mother Show – Austin is available here: https://avalovehanna.com/vagina-mommy-ltym/ **

Today, I went to use the restroom and through the cracked door I heard my 4 year old saying, “Hey, you’re going potty, but you don’t have a weenie.”

I froze, partially because of my son’s obvious lack of bathroom etiquette, and partially because I could sense there was something serious about this moment. My son was aware that we were different in a fundamental way and that was probably a big deal.

“Yes, you’re right,” I said slowly, trying to decide what to say next. I could hear the mixture of confusion and curiosity in his voice as he pondered the situation and I wanted to help him understand. So, in some delusional moment of over-confidence I decided:

Hey, I really should teach him the correct terminology for our body parts. I can totally do that; I’m a grown-up, right?

At this point I should insert that despite technically being a grown-up, I’m really not. I feel about 12, maybe 14 on a good day. I just pretend to be a grown-up. I’ve perfected the ability to nod knowingly when people start to talk about designer kitchen cabinets or 401-k’s. I pay bills, feed and clothe myself and my child, and have advanced degrees in very mature things like English and Communications, but inside I feel like a little girl who has somehow snuck into the grown-up world and am certain that at any moment the real adults will catch on and take away my cool grown-up stuff like cars and alcohol.

Despite feeling this way, I’m a good parent. No, I’m a great parent who loves my son with a devotion I didn’t know I was capable of possessing, I am, however, constantly filled with self-doubt especially when it comes to some of the more unexpected milestones, like the first time he asks me about genitals.

But today, for some unknown reason, I was feeling super confident. Maybe it was the confusion in my son’s voice, or my feeling of sadness that he was noticing we were different and my mom instincts went into overdrive, but I told him (in my most serious and mature voice), “Yes, I have a vagina.”

I’m not exactly sure what I expected next. Maybe he was supposed to say, “oh, ok mommy, thanks,” and move on, or sit and nod knowingly, enlightened by the new information, instead there was a pause… and then he giggled. Maybe he was laughing at the sound of the word, I mean it really is a funny sounding word or maybe he was laughing at me, but all I know is that the next thing he says is, “Hey, Vagina-Mommy!”

What. The. Hell? Did he really just call me Vagina-Mommy?

I pretended not to hear him—and because I am an idiot— I kept talking as though nothing unusual had happened. I told him that his “weenie” is actually called a “penis” and that boys and daddies have penises, and girls and mommies have vaginas.

The next thing I hear him say is, “Hey Vagina-Mommy, I’m Penis-Kai!”

What the hell is happening here?

I’m starting to panic at how quickly I lost control of the situation and my brain is screaming:

Everything was suddenly in slow motion, like the moment before an accident: you can see it happening, you know it’s bad, but there’s nothing you can do to stop it. Here I was in mid-crash and because I was still an idiot, I just kept talking thinking that that would somehow get me out of it

I told him that the words penis and vagina are “special words about special parts of our bodies and that we don’t really talk about them.”

It occurred to me then that this is exactly the kind of parenting moment that will probably screw up a person for the rest of his life. I might somehow give him genital-shame, or vagina-phobia, or something worse that I’d never heard of because I don’t ever read parenting books, and so I told him,

“Well, we CAN talk about them, but we definitely don’t just call people by their genitals. Now, if there is something going on and you need to tell me about your penis, that’s okay. You know, you can always talk to me about your penis.”

Yeah, I was feeling pretty weird about that last sentence…

The general rule about genitals is that society doesn’t want you to talk about them, especially with children, but I can’t figure out how to get out of this conversation with my 4 year old without either giving him body issues, or having him repeat things that make me sound like a genital obsessed pervert.

Maybe this type of situation would be easier to navigate if my son was dumb, but unfortunately, he’s not. He’s incredibly intelligent, like evil genius intelligent. Moreover, he’s hilarious and has a great sense of timing, and I had just inadvertently given him the newest weapon in his comedic arsenal: words that were kind of dirty and made grown-ups visibly uncomfortable. So, as he stood there staring at me with his calculating 4 year old eyes, getting ready to call me Vagina-Mommy yet again, I said the only thing I could think of to make it all go away:

“Hey, let’s go watch a bunch of Transformers on Netflix.”

And with that I expertly extracted myself from the genital talk… for about 2 hours until his dad came home and was greeted with an enthusiastic, “Hey Penis-Daddy!”

At which point, I promptly left the room.